Today my Dad became a flight instructor!! And David became the Navigator!

All morning David chatted away, while looking out the window saying :

“Grandpa is coming with an Airplane!!

When is he coming?

My Dad had let him know on the phone that he would be here Thursday.

I think the anticipation was too much for this 3 year old ball of energy.

He was happy, excited, angry, disappointed and impatient and so curious all in the same hour after I finally told him what day it was… I was smart to wait…. lol

So we went outside to get some energy out and find a distraction – riding the tricycle did the trick!

When Grandpa pulled up David said “did you bring the airplane?’”

Grandpa said “ YUP!”  and he sat down to assemble the little foam plane. 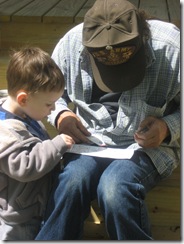 David was so excited, he watched very closely…commenting the whole way. ( of course :0p )

Finally it was time to try it out…

David just wanted the plane but Grandpa said he had to give David some flying lessons first. 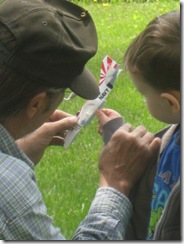 ( You have to hold it right here… right where? Right here. )

At this point David seemed to think that I should know where the Airplane is to fly  :0)

And then it was time to give it a whirl … 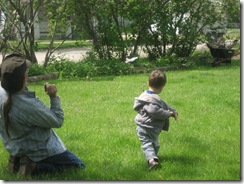 Grandpa says “ I have an idea!”

And they took their first really great flight off the porch …

He always takes his time

Most people have to hurry…

they do not stop and see.

I am glad that God made Grandpa…

To read  the series : https://starleeta.wordpress.com/a-boy-his-grandpa/

Thank you for sharing your thoughts with me.